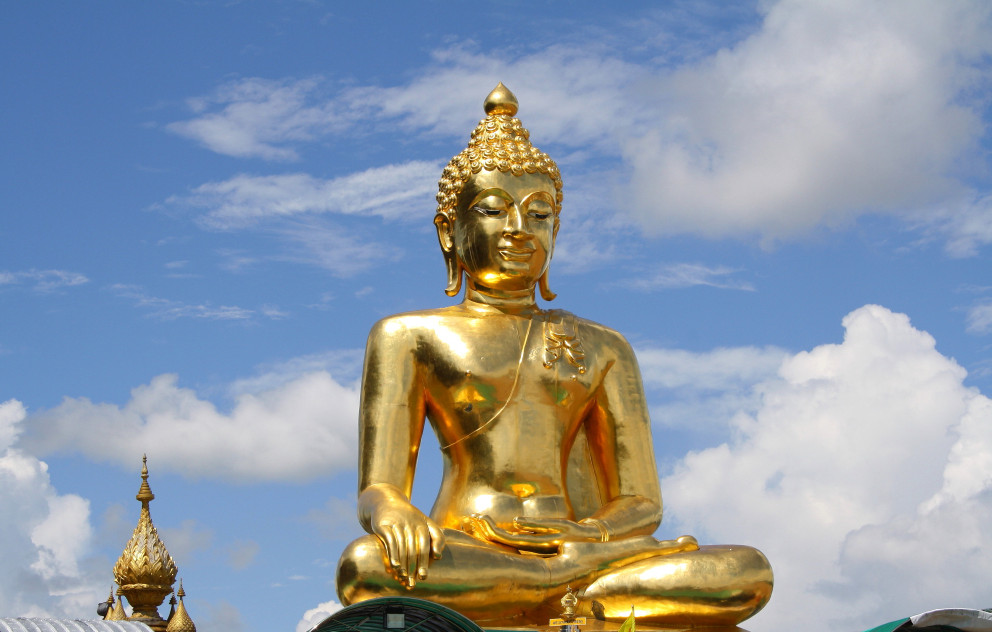 “In 1957 a group of monks needed to relocate a giant clay Buddha statue from their temple to a new location, since their monastery was being relocated to make room for a highway through Bangkok. When the crane lifted the massive idol, the weight of it was so tremendous that it began to crack. The head monk, who was concerned about damaging the sacred Buddha, decided to lower the statue back to the ground and cover it with a large canvas tarp to protect it from the coming rain.

Later that evening the monk went to check on the Buddha statue. He shined his flashlight under the tarp to see if the Buddha was staying dry and noticed a gleam of light shining through the crack in the clay. As he took a closer look, he wondered if there might be something underneath the clay. He ran to wake the other monks. With a chisel and hammer in hand, the monks began to carefully chip away the thick clay from the Buddha. As they knocked off shards of clay, the little gleam grew brighter and bigger. After hours of chiseling, the monks stepped back and stared in awe at the sight before them. There, in front of the monks, stood a solid gold Buddha.

Historians believe the Buddha had been covered with clay by Thai monks several hundred years earlier. After realizing their country would soon be attacked by the Burmese army, these monks covered their precious golden Buddha with an outer covering of clay in order to keep their treasure from being looted by the Burmese. Unfortunately, all of the monks were killed in the attack, but their well-kept secret of the golden Buddha remained intact until its discovery in 1957“.

I love this story as it reminds me of ‘What we really are’ and not ‘Who we think we are’. What we are is that golden buddha within, our true essence, covered with layers and layers of thoughts, beliefs, feelings. All this put their for our protection, from a misunderstanding. Helped there by our well meaning parents trying to protect us. Put there by us too, we also have the free will to choose our own beliefs, make our own decisions, so starts more layering. We keep on layering with Thought and more Thought until we have forgotten what we were and where we came from. Our parents are innocent, and we are innocent. A new born baby doesn’t forget, it knows where it came from, it feels this goldeness, it lives in curiosity and knowing. It knows what its like to feel innate joy, peace and love from within – understanding that these states of joy come from within and not, as we wrongly think, that these feelings are coming from something, someone, outside of us. From the outside in. In time, the child slowly forgets and spends the rest of it’s life looking for what it once knew to be true. We are all doing this, but we are looking in the wrong place – we are looking outside, when all the time we have just forgotton what we are.

Slowly we as parents stop seeing this golden core, the child’s true essence. We start to see our children like the buddha above, covered in cement – no longer shining. We get caught up in our thinking, we start to say things that may tarnish our children and starts to dull that golden core.

So when we speak to our children, when we behave in certain ways – always think of the beautiful diamond that is within them, this innate wisdom, intelligence and allow it to always shine. Allow it to remain strong and powerful, emanating from their bodies and touching those around. Don’t let these little golden buddhas forget ‘what they are’. That goes for you too, connect back with your golden core and allow that to shine stronger than the layers of cement. In time they will disintegrate.

« My cooking failures and what they teach me
“Mirror, Mirror on the wall who is the wisest of them all?” »